The Making of Baba Yaga 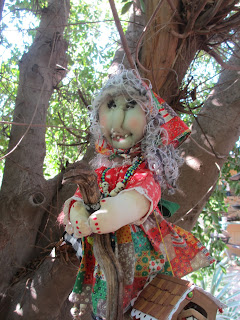 My current fascination with the character Baba Yaga came during a kitchen clean-up.  Hanging in the corner was my kitchen witch, a stuffed doll I had made many years before.  I knew she needed dusting but something about her seemed “off.”  This benign figure flying on a wooden spoon no longer seemed capable of providing any protection or blessing to my kitchen at all.  This was no Chinese “kitchen god” after all. The world today, struggling with so much carelessness and cruelty could not be protected by a mere kitchen witch.  I needed something more and she needed to be more.

That’s when I remembered Baba Yaga, the larger than life witch found in the Russian fairy tale.  If I needed a talisman, Baba Yaga fit the tenor of the times.  It was then that I decided to transform my kitchen witch into Baba Yaga.  In the process, I discovered more about the story and the two wise crone characters within in it than I could ever have imagined.

As the creator of one-of-a-kind art dolls, I was used to my dolls “speaking” to me.  But it soon became clear that I was not making one doll, I was actually making two.  In the story of Baba Yaga, the heroine, Vasilissa, was guided by two crone figures.  The first, was Baba Yaga, who lives in a forest Helen Pilinovsky describes as “a traditional symbol of change and a place of peril, where she acts as either a challenger or a helper to those innocents who venture into her realm.”  In this way, Baba Yaga corresponds to many of the other crone archetypes seen in fairy tales.  Although dark, ferocious and dangerous, she lives by her own code of ethics. It seemed that in her world, keeping your word was more important than taking a life (of which there was plenty of proof).  The second character is the grandmotherly figure who facilitates Vasilissa’s ultimately meeting of the tsar.  “In Western tales, these two roles are typically polarized, split into different characters stereotyped as either ‘witch’ or ‘fairy godmother’,” Pilinovsky writes. “Baba Yaga, however, is a complex individual: depending on the circumstances of the specific story, she may choose to use her powers for good or ill.”

To me, there was something unsettling about that part of the story.  Baba Yaga simply allows Vasilissa to leave after meeting her part of the bargain.  It all seems too easy and the reader wonders whether it is a trick.  Is the grandmother figure kind or is she really Baba Yaga in disguise? There is an uneasy tension here for many folktale motifs concern transformation of the seemingly good into the frightful (Snow White’s step-mother, for example) or the evil into the appearance of good (the Wolf in “Little Red Riding Hood”).  Holding on to the edge of the seat, the reader is waiting for Vasilissa to slip up until the story ends. 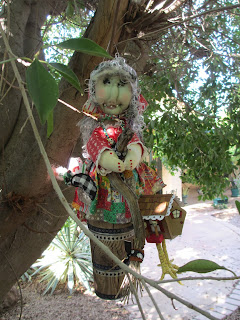 That tension is what unfolded for me as I transformed my kitchen witch into Baba Yaga.  I tried to make her face into something more fearsome but the more I tried, the more I saw the blurring of the witch with the crone. To me she looks as if she has tried to “pretty” herself, but underneath the Shadow appears.  In Jungian psychology, the Shadow is the part of us that remains unknown.  It might be our darkness and it might be our greatest potential. There is much power in Baba Yaga, so I think that rings true.  Around her neck I placed a necklace of colored beads and human skulls. Without being aware I created the necklace with the same dichotomy that I did her face. On her apron I sewed a new pocket.  Into it I placed a wild looking wooden doll.  Although this was not true to the story, it seemed needed. 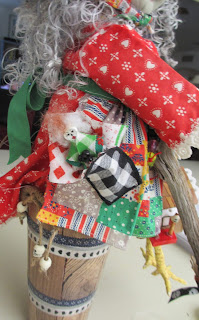 In the story, Vasilissa is given a doll by her dying mother.  It was a doll that had magical powers and allowed her to complete all the tasks given to her by Baba Yaga. Without the tiny doll, Vasilissa would never have completed the tasks given to her to prove her worth. Maria Tatar writes an explanation, “Whereas Cinderella and her folkloric cousins usually receive assistance from nature … or from a fairy godmother, Vasilissa is given a cultural artifact, a figure that can be seen as a miniaturized version of herself or as a symbolic form of her mother. While the doll protects and helps Vasilissa, it is also something to be nurtured and cared for, thus strengthening the fact of her own agency in escaping from villainy at home.” Accordingly, this wooden doll also became Baba Yaga’s source of power. 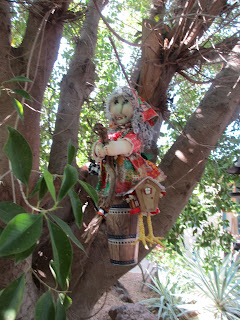 Most witches in Western folklore ride on brooms, instead Baba Yaga rides in a mortar, rowing with a pestle, and using the broom to erase her tracks.  I placed my doll in a mortar I fashioned, complete with skulls hanging around the handle. She holds a twisted branch that both serves as a broom and a pestle.  Duality seemed the key to her recreation on an intuitive level. 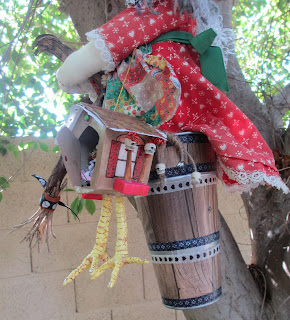 Baba Yaga’s house stands on chicken legs.  Around it is a wall made with human bones and on top is a human skull. I crafted a smaller version of this house which I hung from her arm.  The skulls on the fence were fiery to represent the light she gave to Vasilissa to take home. Inside the house you can see a nest with an egg.  Again, this is my addition, for the contrast of light and dark ring strong in this tale.  The egg is the potential for something more. 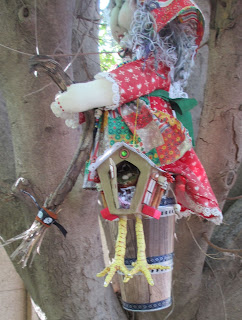 It is uncertain how many tasks Vasilissa would have been given if she did not disclose that “the blessing of my dead mother helps me.” Baba Yaga replies, “I want no one who bears a blessing to cross my threshold!” Marie-Louis von Franz writes, “Baba Yaga, who here is almost completely evil, though when she hears that the girl is a ‘blessed daughter’ she tells her she does not want her in her house.  So in a hidden way, she is not thoroughly evil, and sometimes even helpful…” Remember, at the end of the story, Vasilissa meets one more crone. This one serves as her surrogate mother. Marie-Louise von Franz describes her as portraying the Great Mother in her double aspect. Here she facilitates her meeting and ultimate marriage with the tsar.

While transforming the doll, I did not consciously seek to have her embody both aspects. It was the tension I found in reading the story that led me to this discovery.  Not the tension in the fearsomeness of the Baba Yaga witch, but in the quiet, helpfulness of the grandmother figure. It’s not just the Shadow and the Light of these two opposites that makes one uneasy.  That is the norm for the archetypal.  It is instead the living potential for an unexpected appearance of the “other” that seems so unsettling.

When it was all said and done, it was this unpredictability that made Baba Yaga so attractive to me.  In a world filled with climate change, raging wannabe despots, injustice and cruelty; she is sorely needed – both in her mortar flying self with unlimited power and rage and in her kindly and compassionate alter ego.  Each of us as women today may need to connect to these two archetypal forces.  The crone’s ferocious strength and her compassion to serve those needing help, are required in a world in crisis.

The wise crone continually asks, “Who is worthy?”  “Who is worthy?” The answer always rings true to the crone.  For the rest of us, the Baba Yaga tale answers this question thus. “Well, said the old witch, “only remember that every question does not lead to good.  If thou knowest overmuch, thou wilt grow old too soon.  What wilt thou ask?” Marie-Louise Von Franz explains “How much evil can one afford to see without losing one’s appetite for life?  If one has to, if one’s destiny forces one into it, one has to take it, but to load the boat with evil which is not in one’s own fate and has been picked up out of sheer curiosity is not recommended.”  Such is the challenge for all of us living today.