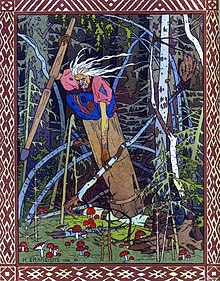 In earlier blog posts we have explored the crone as the helper and as the judge, now it is time to address her shadow side – the unpredictable and dangerous witch.  Of all the crones found within folktales, perhaps Baba Yaga is the most frightening of all.  This is not a grandmother motif who will box your ears as a punishment; but a powerful, crafty woman who wishes to eat you bones and all!  While many older women feel invisible, Baba Yaga laughs in the face of those who believe her powerless.  Aligning with this archetype makes any woman a force to be reckoned with.

This Slavic folktale begins with Vasilissa, the beautiful.  Vasilissa is a Cinderella-type character, and the first part of the story mirrors the ancient tale perfectly.  Vasilissa’s mother becomes ill, but before dying leaves her with a wooden doll that has magical properties.  Vasilissa was told that whenever she was in need, she was to take the doll from her pocket, feed it, and then tell the doll her plight.  She was then to follow the doll’s guidance.  Soon afterwards, her father marries a cold, heartless woman with two daughters.  He leaves home on a journey and the trouble begins in earnest. Vasilissa’s step-mother begins to send her into the forest on dangerous errands.  In truth, she hopes she will run into Baba Yaga (who lives there), but the magical doll protects Vasilissa. Finally, the step-mother and step-sisters concoct a plan in which Vasilissa is sent to the home of the witch, Baba Yaga, to borrow some fire.

Baba Yaga, was a frightening figure to look at and her actions were no better.  She rode around in a mortar which she guided with her broom.  She lived in a house that walked around on chicken legs and was surrounded by the fiery skulls of humans she had most likely eaten. Vasilissa walks bravely to the house and tells Baba Yaga that she seeks fire for her step-mother.  Like Frau Holla of the German folktale, Baba Yaga agrees; but only if the girl will work for her.  She must successfully complete several impossible tasks or become Baba Yaga’s dinner.  We have seen this motif in many other folktales where the innocent girl is given tasks beyond her skill level and is only saved through magical means.  In this story there are two tasks.  The first was to pick all the black grains and wild peas from a measure of wheat.  The second, was to clean the dirt from a half measure of poppy seeds.  Baba Yaga knew these tasks were impossible to ordinary humans and after giving her instructions, she flies away.  It is only then when Vasilissa pulls out her doll, feeds it and tells her the story.  The dolls eyes glow, she tells her to say her prayers and go to sleep.  When Vasilissa awakes, the difficult tasks are completed.  The doll gives her the final instructions and then reverts to its wooden state. Each time, Baba Yaga returns hoping to find that the girl has failed.  But when she discovers she has performed the tasks perfectly, the witch pretends to be happy.  She engages in conversation with the girl and allows her to ask some questions (to trick her further). But this time, the girl (even without the help of the doll) is clever and thwarts the test.  While it was impossible for Vasilissa to complete the tasks alone, she is proven pure hearted and worthy.  Finally, Baba Yaga asks how she completed these tasks.  Vasilissa simply says she was blessed by her mother. Outraged, and perhaps even a bit fearful of being in the presence of someone blessed, Baba Yaga throws her out.  But before she leaves, Baba Yaga is true to her word.  She gives her one of the human skulls with fire burning from its eyes.  Vasilissa places it on a stick and makes her way home.  She soon discovers that the house is cold and dark.  For as soon as Vasilissa left, there was no way to make fire there. She took the spark of life with her.  The skull advises Vasilissa to bring it inside and so she set it on the table.  When it saw the step-mother and step-sisters, the skull engulfed them in fire and they burned before Vasilissa’s eyes.

Now we return to the Cinderella tale, for the next day Vasilissa goes to live with a kind old woman to await her father’s return.  She becomes bored and asks if she can spin, so the old woman brings her what she needs.  Vasilissa spins the most beautiful fabric that she gives to the old woman for her kindness.  The old woman brought it to the Czar and through a series of traditional folktale events, the Czar ultimately falls in love with Vasilissa.  They all (including her father and the old woman) live happily ever after.

This story contains two crones, one perhaps seen in shadow and the other in light.  Both were honorable in their own way and ultimately helpful to Vasilissa.  Both found her clever, pure of heart and worthy.  Each taught her the value of honesty and hard work.  One was evil and frightening, the other served as her “fairy godmother.” While the moral of the story is the same, in this folktale we see two sides to the crone.  Perhaps the kindly crone was actually Baba Yaga in disguise.  As older women living today, both sides of the crone are needed. We are only invisible if we believe we are. For in a world that has lost its moral core, a bit of Baba Yaga might come in handy to scare folks right back into the light. Use this gift wisely.

For more information on the Baba Yaga story check SurLaLune fairytales.com. Illustration of Baba Yaga was depicted by Ivan  Bilibin (1899).