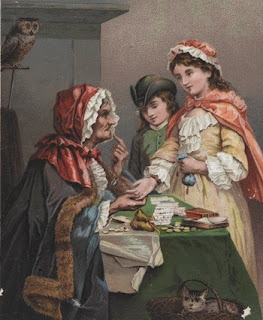 The Fortune Teller is a Trickster tale from Russia.  The story goes something like this. A poor old woman and her son were starving, until one day she had an idea.  She told her son to go find some horses, untie them, and then take them to another location.  She was known as a fortune-teller, so she just waited.  Soon the owner of the horses came to her for a reading.  He couldn’t find his horses anywhere. The Fortune-teller pretended that she too sick to leave her bed.  He promised her a great reward, if she would only help.  She read the cards and “predicted” where the horses could be located.  When the man got there, he discovered that the horses had been moved yet again.  He returned to the Fortune-teller who was now in bed, coughing and wheezing.  After much cajoling and promises of even greater riches, she agrees to another reading.  This time he found his horses easily.  Her fame as a fortune-teller then grew and she did many readings.

One day, two men came and took her away.  A rich man had lost his stash of money and wanted her to find it.  She didn’t know what was happening and began to cry out.  The men guiding the carriage thought that she was talking about them and knew that they were the ones to rob their master. They ultimately told the old woman where the money was hidden in exchange for her silence.  To the rich man, she pretended to be old, feeble and sick.  He fed her and cared for her and promised her riches, if she would only do a card reading.  During the reading, she told him the location of the money that the two robbers gave her.  When the rich man returned he kept his promise and was so happy he even gave her something more.  Further, the two robber-servants were relieved that she had not identified them and also gave her a reward.  She returned to her son wealthy and together they lived happily ever after.

The Trickster is a figure that causes chaos and often disruption. It comes during times of transition. It is more amoral than not.  It brings doubt into what was once certain. The Trickster achieves its childish (or hedonistic) self-serving goal through trickery of some sort – lies, manipulation, fraud or a scam.  Does this sound familiar? Yes!  We live in the world of Tricksters.  This is a world that continually gets up-ended because it seeks stability when the ground is shaking.  The Trickster thrives in chaos and in the unexpected. It enjoys bringing forth the upheaval of individuals or societies.

There is a wonderful Coyote tale   in which the Coyote goes to his favorite town to cause some havoc.  When he gets there he discovers the town is empty, for the people have been eaten by a monster.  Instead of being distraught for the people, he is upset because they aren’t there for him.  It is only for that reason that he seeks them out and ultimately rescues them.  And so, what do we do when we are a people governed by Tricksters? Do we wait until they rescue us from some great calamity or do we take action ourselves?

The natural inclination is to try to find the moral high ground.  Certainly the Trickster can understand a logical and well-reasoned argument, we think. Certainly the Trickster can be swayed by those suffering and in need.  Sadly, its all a waste of time.  Remember, the Trickster has the ground shaking.  It’s a shape-shifter who can change positions as easily as appearance. The lies and treachery of the Trickster polarize and hide the Truth.  The common bonds between us are shattered until we become morally bankrupt ourselves.

And so, what does that wise Fortune-teller have to say about the world today?   In the Fortune-teller, we see an old woman willing to upset the status quo, but only when needed.  We also see someone who unleashes her inner Trickster as a means to a “good end.” She is the conscious Trickster. The conscious Trickster knows there is unfairness and injustice in the world. There is no clear moral compass, no infallible scale to determine what is right or wrong. Everything in this world is seen in continum, all in shades of grey.

The Fortune-teller is ready, willing and able to do what it takes to save her family.  She is in survival mode. She uses her wisdom and knowledge of people to move events in her favor.  She didn’t steal the horses, she simply asked her son to move them.  She didn’t steal the rich man’s money.  She simply used her wisdom of human nature and the luck of the moment to uncover the truth.  She didn’t claim to be the best Fortune-teller, she just sat and waited. This might sound a bit iffy from an ethical or moral perspective, especially if you wish to see the world in absolutes.  But I ask you, how many times do parents manipulate their children into making a better choice? How many times do we flatter our mates to control their anger?  How many times do people lie or deceive for the greater good?

This type of energy is common in the stereotypical woman. In its Shadow form it can be seen as the "wily female." Manipulative actions are sometimes taken by women having little or no real power in the world.  It is the ability to use their intellect, their words and emotions in their favor.  It is the "tricks" some use to survive in this world. (By contrast, the sterotypical man in stories tends to act out violently in such situations.)

Sadly, just like the Fortune-teller, we have many a hard choice to make. Some of us may find ourselves equivocating on moral positions (perhaps even voting for people we opposed in the primaries). We no longer can be self-righteous, when the flaws of self and others are spotlighted.  These are grey days in a broken, liminal world.  Is a “lesser” sin justified if it avoids a greater one? In a Trickster world all that divides and polarizes us is simply for sport.  Each of us must ponder how to use this archetype in our own lives.  Each of us, like the Fortune-teller, must make the Trickster conscious.  In doing so, we can use this chaos for our own end and for the greater good. The conscious Trickster, who showcases its own hypocrisy, just might move us safely through the land mines that lie ahead.

Thank you to the Fortune-teller who shows us the way!