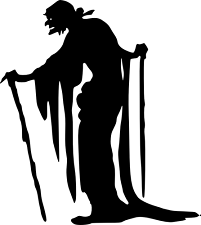 You’ve got to love a story with both a crone and a hag!  Plus, this is the story of the Irish hero, Finn Mac Cumhail.  It’s a story in which Finn’s skills are found to be no match to two old women. For the story itself, see the September 2022 post, “The Birth of Finn Mac Cumhail.”

Finn’s life was part of a prophecy.  It was said that the birth of a son to the King’s daughter would cause him to lose his kingdom.  Hence, once Finn was born, his life was in danger. Finn's very grandfather, the King, sought to kill him. Fortunately, his paternal grandmother was tasked to hide and protect him.  First, she rescues him from the lake and then she creates the ultimate hiding place…a tree! (Seems a bit like Merlin if you ask me.)  She tasks a woodman to hollow out a large tree. Inside there was a room big enough for her, Finn, and their dog. When the woodman finished, she chopped off his head to keep their secret.

“You’ll never tell any man about this place now,” she says.

For five years they lived in the tree.  When they finally came outside, she had to teach the boy to walk. Her incentive was to use a switch of stinging nettle. (For those of you who have never experienced stinging nettle, just know one touch feels like you have been pricked by many needles.  It continues to cause numbness for some time thereafter.) Granny told Finn to run down the hill and if she could catch him, she’d strike him with the switch.  Coming up the hill, she’d run first.  If he could catch her, he could strike her too.  It wasn’t long before he was striking her every step.  Personally, I think she let him catch her.  You’ll see why, later in the story.

At age fifteen, Finn goes to a hurly match and takes sides against his grandfather King.  With his help the neighboring king wins.  His grandfather is outraged and wants to know who that fair skinned, pale haired youth was.

“Who is that white cap (or Finn Cumhail),” he said, wishing to seize and kill him.  And at that, Finn was named by a grandfather who thought he had died long ago.

Finn needs another escape, and his grandmother comes to the rescue.  They run away together. When Finn grows tired, she carries him on her back putting his feet in her apron pockets.  They run and run until a black horse approaches. The old woman knows this horse will catch them, so she jumps into the bog. She tells Finn to run away and sacrifices her life for his.  Finn escapes and his grandmother’s head is cut off. It’s taken to the king and told it was Finn.

Later in the story another old woman appears.  This one is an old hag who lives with her three sons.  Every evening she sends her sons to burn the king’s dun, a type of hillfort.  We don’t know why she’s doing this, but it has been going on for some time and no one has been able to stop it. The king offers his daughter’s hand in marriage to anyone who can stop the burning.  If they fail, well, “off with their head.” (There is way too much head chopping in this story!)  Finn agrees to give it a try.  The hag sends first one son and then another to burn the dun. Finn fights with each of them in turn.  When the eldest, “Cat-head,” arrives Finn chops off his head. But his head just won’t die!  It attacks Finn’s breast and can only be removed by some magic potion of the hag.

Finally, the hag arrives and immediately we can tell she has way more power, skills, and strength then her sons. (I might say the same about Finn’s grandmother.)  The two were locked in a terrible battle. It was described as “greater than the world had ever known before that night or seen since.”  Ultimately Finn won, he’s an Irish hero after all.   He uses her blood to save his own life.

But let’s be clear here.  How or why, he won just doesn’t make sense.  It wasn’t long before, that his grandmother was carrying him on her back.  This part of the story is similar to the Welsh tale, “The Very Black Witch” from “How Culhwch Won Olwen.” (A full discussion of this story can be seen in the blog posting of November 28, 2019.)  In this story, King Arthur goes on a quest for the Witch Orddu. Instead of an easy battle she defeats and injures many of his men.  Arthur does ultimately kill her, but not by engaging her.  He throws his knife from the entrance, cleaves her head in two, and gathers her blood. It is an unlikely win as was Finn’s. Hags are not to be crossed and certainly not to be messed with.

This is the tale of two old women.  Not two old decrepit, shaking voices, cane carrying grannies, but two powerful, magical old women.  Both are surrounded by family. The hag comes to chastise her sons for their delay in setting the fire.  When she sees what has occurred, she doesn’t appear to grieve their loss.  Her despair is that her will was thwarted.  She was using her children for her own end.  As the hag, she is ugly both inside and out. She was ultimately defeated but not without a perilous fight.

Finn’s grandmother was the wise crone.  She was protective, wise, magical, and strong.  She was a seer with skill to know the future. Everything she did was to protect her grandson.  She’s not the helpless grandmother we see in many folktales. She is a force to be reckoned with.  When the time came, she knew that by sacrificing her own head, Finn would be safe.  He would be free to ask for the release of the men in the king’s dungeon.  He would be able then to start his own band of warriors, the Fenian.  Together they would go on many adventures

So, you might well say, the moral of the story is “don’t underestimate the wise crone.” But, I’d say, it’s more than that.  Don’t dismiss someone because you think they are an unlikely opponent. Don’t refuse the help of your elders, and never, ever underestimate the power of love.

Posted by wisecronecottage at 10/24/2022 12:05:00 AM
Email ThisBlogThis!Share to TwitterShare to FacebookShare to Pinterest
Labels: 2022, Celtic, Mythology