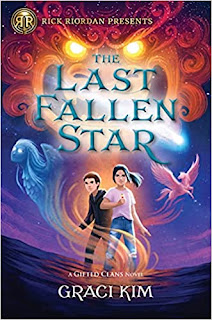 The Last Fallen Star (a Gifted Clan novel) by Gracie Kim is a book of "tween," fantasy, fiction.  It is the story of a young Korean girl, Hattie, who was adopted into a magical clan. Hattie feels like an outsider because she has no magic. While seeking to acquire it, a misplaced spell puts her sister’s life in peril.  This is Hattie’s hero’s journey to rescue her sister and discover her own identity and place in the world. The backstory is based on Korean mythology, and it is filled with witches, goddesses, and creatures from another world.  Filled with Korean language and culture, there are references to popular K-pop figures and K-drama. Fortunately, the author provides a glossary should the reader lose track of the meaning of the Korean words. First, in the “Gifted Clan” series, the reader is left with many questions and much anticipation for the next installment.
Kim, Gracie, The Last Fallen Star (New York: Disney Hyperion, 2021).
Posted by wisecronecottage at 9/13/2021 09:14:00 PM
Email ThisBlogThis!Share to TwitterShare to FacebookShare to Pinterest
Labels: 2021