"The Hyena in the Grassland" - a Syrian Folktale 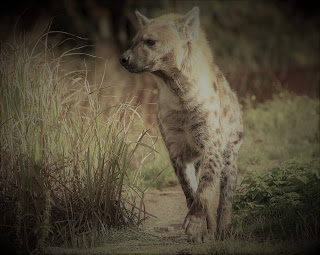 I’ve been reading the book "Grandmother's Stories: Tales from Old Syria” by Reda Al-Dabbagh.  These are modern interpretations of Syrian folktales with female protagonists.  Several include the wise crone. My favorite so far is the story “The Hyena in the Grasslands.”  Because this book is still under copyright, I will summarize it for you here, with the hope that you’ll be able to read this book yourself someday.

There was once a little girl who behaved so badly that her mother sent her to live with her elderly aunt.  Yet even this did not change her.  The girl lied and stole and continued to do so at her aunt’s house.  She even took and hid her aunt’s cane.  When the old woman confronted the girl, she stamped her foot in rage.

I hate you!” she screamed. “I’m going home to my mother.”

Her aunt tried to calm her.  It was sunset and not safe for the girl to walk home through the grasslands.  But instead, she rushed out of the house and soon found herself deep in the grass with the sky growing darker.  Suddenly, the girl heard an unexpected noise and found herself being circled by a large hyena with sharp teeth.  He appeared to be very hungry.  Acting as brave as she could, the girl asked the hyena if he knew the way to her mother’s house.

“Oh, I know the way,” the hyena snarled, “And I’ll take you there on one condition.  If your mother won’t let you in, you will be my dinner!”

The girl agreed.  There was nothing else she could do.  They made their way together through the darkness.

“Now, remember,” the hyena said. “You have three tries.  If your mother doesn’t let you in, then I’m eating you for dinner.”  He licked his lips just thinking about it.

The girl knocked on the front door.  It was late at night, and her mother was fast asleep. She didn’t stir.

This time the girl knocked even louder.
“Mother, let me in!”  she yelled.  “Please let me in!”

This time her mother sleepily replied, “My daughter is with her aunt.  I don’t know who you are, so go away!”

The hyena moved closer, “Only one more try now, sweetie.”

In a panic the girl began to bang on the door.  “Mom, Mom!  Let me in.  There is a hungry hyena out here who will eat me if you don’t!”

“Well,” the mother replied.  “You sound like my daughter for she is always telling lies.  But if you are her, you probably disobeyed your aunt, so you can just wait on the doorsteps until morning.”

“Ah, ha!”  Before the girl knew what was happening, the hyena leapt upon her and bit off her left foot.  “I’m going to start at the bottom and work my way to the top!” he said. But just before he was took another bite, someone came out of the darkness.  Then with a crack and a few thumps, the hyena was dead.

Standing before the girl was her aunt, who had hit the hyena with her cane.

When they finally made their way inside, the aunt explained that she had been worried and had followed the girl home.  She was only sorry she hadn’t arrived sooner.  Her mother was equally sorry that she had not let her in.  But the sorriest one of all was the young girl.  She understood that her fate was of her own making and pledged to change her behavior. She promised to no long lie, steal, or have tantrums. And because she was true to her word, her aunt gave her the walking stick. It helped her move better with her remaining foot and was a constant reminder of her brush with the hyena.

The story is reminiscent of “Little Red Riding Hood.”  It’s a cautionary tale of unexpected danger. In each story, the young girl engages in conversation with her predator.  In “Little Red Riding Hood,” the wolf is disguised as her grandmother; but in this story, the hyena is in plain sight.  Evil is right before her.  There is no wood cutter to save her, and her fate seems certain.

That is, until her elderly aunt comes to the rescue. The story may be about the girl, but it is the crone who becomes the unexpected hero.  She lives some distance away but agrees to take on a troubled child.  Perhaps her mom just needed a break.  Many parents of rebellious teens would love to have that option.  I imagine the aunt volunteering. Perhaps her children are grown and gone. Perhaps her experience is needed.

Sadly, the girl has not been in the house long before the first confrontation. The child is scolded for her bad behavior and she runs away defiant. The aunt follows her knowing there are dangers in the grassland. She is old and decrepit. She walks with a cane but this does not deter her. Her way is only a bit slower, for she must know the grasslands well.  Nevertheless, she makes her way just in time to save the life of the girl.  It is a surprising moment of female heroism to be found in a folktale.  No one would have been surprised if she did nothing. Crones are unexpected heroes at best in these stories. Still, there is sadness and a yearning for what might have been - if only she had arrived a few minutes sooner.

However, the aunt doesn’t wallow in what might have been.  She’s there watching the girl and when the time is right, she gives her the walking stick as a gift.  It’s the perfect symbol of both her defiance and the love that saved her. And of course, the crone knew that all along.

What does this story have to teach us today? Sometimes we are called upon by others - family and friends who need our experience and knowledge. As crones, we are ready to answer their call. But please be aware that this is not the crone meddling in the lives of others.  It's a knowing of when to step in and when to stay out, waiting and watching. She is living her own life, but still ready to help and be of service when asked.

The crone did the best she could with the girl, but things don’t always work out as planned.  After arguing with her, the aunt didn’t stew in anger.  She didn’t sit down and pout.  The crone knew there was danger and rushed out after the girl.  Life experience is of value here. There are real dangers in the grassland.  I’m sure tales were told about it. It’s in the history of the land.  The aunt knew it all so well.

Yet, the girl’s mother is still too young to recognize the danger facing her daughter.  She stays in bed and allows her to wait through the night on the front steps. But with age comes experience. There is a reason grandmothers live long lives beyond their reproductive years.  There is a reason for the maiden, mother, crone archetype. The world needs the crone now more than ever.

The crone knows evil and is ready to face and confront it when called upon. So to all you gray haired ladies who think that life is behind them.  Don’t sit down in your rocking chair waiting for the grim reaper!  There is much to be done and all of the universe has conspired to bring you to this very moment. Whether we call this spirit, luck or evolution, you are here for a reason. Let’s all pick up our canes and get to work!

Posted by wisecronecottage at 8/02/2021 07:57:00 PM
Email ThisBlogThis!Share to TwitterShare to FacebookShare to Pinterest
Labels: 2021, Folktales