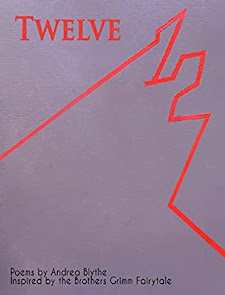 Blyth crafted her small book around the Grimm folktale of the “Twelve Dancing Princesses” (also known as “The Shoes that Were Danced to Pieces”).  It’s the tale of 12 sisters who sneak off at night to dance with the fairies. Each day they return with their shoes worn out.  The King imprisons them and proclaims that any man who can uncover the mystery can marry one of his daughters. If the suitor fails, then it’s off with the head!  The sisters drug the men so they can’t be followed. But a soldier (with help from an old woman) finally solves the puzzle.  The story ends with him marrying the older sister.

This is where Blyth’s prose poems pick up the tale. For each sister she creatively envisions her life after the bliss and intoxication of the otherworld.  She weaves stories of rage and guilt, addiction, and mayhem. Ultimately, it is the tale of women who experienced freedom only to be later confined as the property of men. (And yes, there is a feminist cast to her prose.)  I’m sure each reader will have a favorite sister with her over the top solution to living a life no longer of her own choosing.

Each story is filled with poetic ideas, and beautiful imagery. Each story answers the question of what happens after “happily ever after.” Best of all, Blyth includes “Author’s Notes” that discuss her thoughts on the folktale and how she came to her retelling.

Posted by wisecronecottage at 10/23/2020 11:17:00 AM
Email ThisBlogThis!Share to TwitterShare to FacebookShare to Pinterest
Labels: 2020, Grimm Brothers Tales, Reviews