The Old Woman and Bucca Dhu 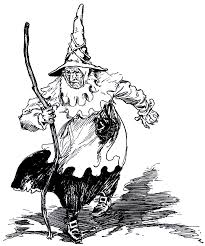 This folktale[1] comes from Cornwall where it was believed that two spirits resided.  Bucca Dhu was a spirit of darkness and Bucca  Gwidden, a spirit of the light.  The tale begins with the old woman living happily, but perhaps she was a bit too happy.  For in one version she was seen gambling, in one dancing, and in still another, she was acting “unseemly.”  Either way, her children were embarrassed by her behavior.  They decided to trick her into submission.  One night on the way home from one of her escapades, her son came upon her dressed as a Bucca.  The old woman naturally recognized him. She convinced her son that the Bucca Dhu was coming for him instead. From that day on, the children allowed the old woman to behave any way she wanted.

The experience shared in this story is a universal one, for parents often embarrass their teenage children. In their youthful arrogance, the children attempt to stifle the creative expression of the crone. They wish her to follow the established social norms. But this she does not do, although it would be easy enough to appease them.  Instead, she frightens them away by turning their trick against them. Now she is free (as her children are not) to live authentically without fearing the opinions of others.


[1] From Ruth Manning Sanders book Peter and the Piskies (Oxford: Oxford University Press, 1958).
Posted by wisecronecottage at 4/01/2018 12:00:00 AM
Email ThisBlogThis!Share to TwitterShare to FacebookShare to Pinterest
Labels: 2018, Folktales