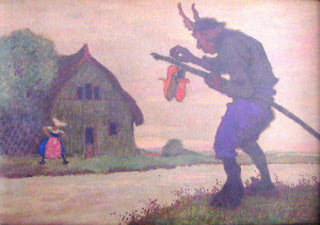 Kitta Grau (Kitta Gray) is a character from Swedish folktales.  As an old woman, she becomes the “unlikely hero” of these stories.  Most often she is pitted against the Devil and wins each skirmish through her own cleverness. In one story she makes a bet with the Devil, telling him she could beat him in a race. And sure, enough she wins because her twin sister is standing at the finish line, just as the Devil crosses it.

In another story, the Devil wants to bring dissention to a newly married couple. Kitta Grau tells him she will do so for a pair of shoes. By simply talking to each spouse separately, she is able to breed distrust in the relationship. She wins her shoes.

In the final story, it was a merchant who made the pact with the Devil.  The Devil agreed that anything that came into his shop would be sold within three weeks at a profit.  He promised that if he became prosperous, the Devil could take him after seven years.  The Devil was true to his word, but the merchant wanted out of the deal.  Kitta Grau agreed to help.  She rolled herself in tar and feathers and laid in a cage as if she was a bird. When the Devil came for the man’s soul, he told the Devil that he had one item that didn’t sell in three weeks and so the deal was broken.  The Devil saw Kitta Grau in the cage and cried out, “No one would buy you, Kitta Grau!”

This old woman, like all tricksters, is both good and evil, hero and villain. Trickster are clever and disruptive.  They tend to behave outside of the norms of social behavior.  All of these are qualities of the Wise Woman archetype, fearless in her independence, bravely willing to face evil, and confident in her ability to control the situation.

This story is found in The Swedish Fairy Book, Clara Stroebe, editor (2011) and in Jane Yolen's, Gray Heroes: Elder Tales from Around the World (1999).
Posted by wisecronecottage at 2/24/2018 05:26:00 PM
Email ThisBlogThis!Share to TwitterShare to FacebookShare to Pinterest
Labels: 2018, Folktales