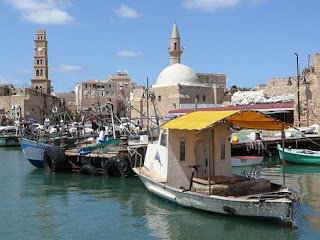 In "Seven Leavenings," a Palestinian folktale, we discover a story of an unlikely hero and helper.  An old woman starts on an adventure while she waits for her bread to rise.  Boats pass her by and refuse to take her aboard until she threatens to curse them if they don't.  The story then moves into two similar situations (perhaps two separate stories), in which the old woman is befriended by a wealthy family.  The old woman soon discovers that the wives are being physically abused by their overly jealous husbands.  The old woman kindly and cleverly speaks her truth to the men and starts to open their eyes.  In one of the stories, she crafts a plan to make the man believe his wife is pregnant.  Ultimately through the old woman's patience and belief in the "Universe," the wife is given a child and all is well.  By the time the old woman leaves, the women are no longer mistreated.  In this story the old woman is assertive and threatening while also being patient, kind and compassionate. She knows through her long experience how to maneuver the world of relationship between men and women.  She understands her own role within her culture and uses it well.  The wise old woman is able to make the invisible (the unjust mistreatment of the wives) visible.  As the reader we  become aware of the hidden worth found within an unlikely source (an unexpected old woman who is their house guest).  See a discussion of this tale in Angela Carter's Book of Fairy Tales.
Posted by wisecronecottage at 6/24/2017 03:42:00 PM
Email ThisBlogThis!Share to TwitterShare to FacebookShare to Pinterest
Labels: 2017, Folktales