"The Thread of Fate" - the Greek Moirai 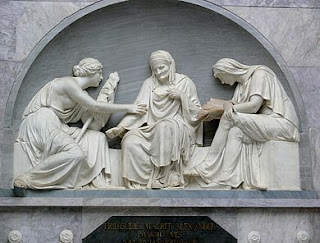 As dawn meets the new day, the chamber is finally still.  For after a long and labored night, a child is born.  Not just any child, of course.  This one is a princess: all pink and chubby, soft, and cuddly, the perfect expression of baby-ness.  There is much rejoicing throughout the kingdom.  All her fairy tale life lies before her. Or so we might think, at least until the fairies arrive to give the child a blessing. In “Sleeping Beauty,” the baby receives both a blessing and a curse.  A blessing of beauty, intelligence, and grace and a curse that prophecies an early death.

The word fairy comes from the Latin word for fate.  These are creatures who meddle in the affairs of humans. But these fairies are a poor excuse for the Greek goddesses who determined the course of every life at birth.  These are not fairies but Fates.   They were called the Moirai: three powerful and independent sisters who plotted each person’s life course.  They determined the fate of humanity by marking two points in time – birth and death.  At birth what gifts are given to this child?  What curses? How would the child be touched by good and evil?  How long would this life be? The Moirai work in secret to answer these questions.

The character and nature of the Moirai is thought to be different depending upon the author.  I’ll try to consolidate what is known. The word Moirai means “parts” or “shares.”  Although some argue that these goddesses were ugly, deformed old women; others depict them as the maiden, mother, and crone.  Either way, their duties were the same. Dressed in white vestments, each goddess was allotted a different task.  Klotho was the youngest.  She was “the spinner” who spun the thread of life. She is depicted with either a spindle or a roll representing the book of fate. She sings of the things that are.

Lakhesis was a woman and the “apportion-er of lots.”  She was the one who measured the thread and sings of things that were. Lakhesis was represented as holding a staff pointing to the horoscope on a globe.

Atropos is the crone. Her name means “she who cannot be turned.”  Atropos is the oldest, the smallest, and the most powerful of the three. She carries a pair of scales, a sundial, or a cutting tool. She is the one who breaks or cuts the thread when life is to come to an end. She sings of things that are to be.

Because these were goddesses of fate, they knew the course of the future.  At times, they shared this prophecy. It wasn’t their primary function for they weren’t oracles.  At times they were also seen in the company of death.  They traversed the underworld traveling with Persephone back to the earth’s surface. But they weren’t the goddess of death even though they set the date.

At the birth of each child, the Moirai spun the thread of fate. Fate as we know it is fixed but destiny is within our control. When might fate be changed to destiny?  Does free will exist in this system at all? These are questions for Greek philosophers but worthy of reflection, nonetheless.  In some writings, the Moirai were independent of the gods, and nothing could challenge fate. Other writers say Zeus was able to challenge any decision.  As time when by, the Moirai lost some power and their actions begin to be seen as more conditional.

Let’s go back to the story of “Sleeping Beauty.”  Was her fate inevitable?  The good old woman in the story said, “not knowing very well what to do in this affair, I cry out for help.”  Which is all anyone can do in moments of inevitability.  It’s true any time we feel our fate is sealed, whether it is through ancestry or genetics, or our cultural programming.  We seem caught between the proverbial rock and a hard place – the free will to follow our destiny seems less and less likely. In “Sleeping Beauty,” the king challenged fate by hiding all the spinning wheels.  But ultimately, she pricked her finger and  succumbed to a 100-year sleep. It was fate after all and there was nothing a concerned parent could do.

Yet again the wise crone is in the midst of it.  What does she know of fate and destiny?  Atropos is the one who carries the sundial and knows when time is late.  Atropos carries the scales, which are needed for balance.  She knows what to release and let go of.  The wise crone lives in a state of discernment.  Who is worthy and when?  She seeks a balance of integration.  What was, was.  What will be, will be.  She sings of things that are to be. The wise crone surrenders to life’s ebbs and flows.  Sometimes she accepts her fate – to be in a world filled with sorrow and chaos.  Sometimes she moves towards her destiny to be in service to others.

Carl Jung claimed that what is held in our unconscious is fated.  What become conscious is our destiny. The ancient Greeks  knew about fate and chose Atropos as the elder.  It takes experience and wisdom to know when to cut the thread, when to let go and when to give up. She is more than ready to release your fate if you are ready to take hold of your destiny.

Posted by wisecronecottage at 4/25/2022 08:47:00 PM
Email ThisBlogThis!Share to TwitterShare to FacebookShare to Pinterest
Labels: 2022, Mythology