The Power of Words - an Indian Folk Tale 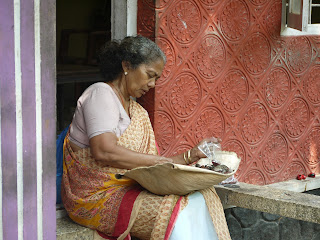 There is a folktale collected by A.K. Ramanujan about a wise old woman.  This woman had cared for her family for many years. She lived in a multi-generational home with her husband, four sons and daughters-in-law. Sadly, even though she worked hard and did much for them, she was often mistreated.  Like many other older women, she was ignored, criticized, and belittled. Wanting to keep peace in the family, she tried her best to stay silent and ignore their rude and disrespectful behavior.  She began to comfort herself with food and soon became very fat.  This just gave her family another reason to taunt her, and so fatter and fatter she grew.

One day, after her daughter-in-law gave the old woman a tongue lashing, she decided to take a walk.  She soon found herself at an old, abandoned house.  Its roof had blown away. The old woman made her way to the center of the house and began sharing her sorrows with a wall.  As many storytellers know, the wall can be a good listener.  The old woman also found this to be true.  And so, she began sharing, tentatively at first, the years of torment from her first-born son.  And suddenly, her words burst forth – filled with both anger and tears. Like a torrent that would never stop, her words continued.  After a while, the wall could no longer contain all the suffering and collapsed before her eyes.  She moved to the next wall and continued to share each horrible memory of her second son – the name calling and the belittling. Soon, this wall collapsed.  This continued as she shared the suffering from her third and fourth sons.  Wall after wall collapsed in the wake of her words.  The house was now in ruins.  The old woman simply walked away.  She was now thin and free from the hurt inside.

This story clearly shows us that words have power.  But sadly, it also portrays the life of a woman who is powerless and without self-esteem.  She lives in a family where she is unable to speak out against domestic violence.  This occurs in all cultures not just India.  In my youth, I watched many older women kowtow to their husbands.  Everything they did was criticized.  They were called names and worse. At 18, I remember a meal with my sister’s mother and father-in-law.  He spent most of the meal speaking words of hate against women and especially his wife.  This continued until I could stand his misogyny no more.  I spoke out to him, in words I no longer recall.  Later, I went back to the kitchen where the other women were.  I apologized to his wife because I didn’t want to upset her.  In 1970, women still knew their place.   I’ll never forget how she told me it was fine. Perhaps she too was looking for a wall to release her pain.

[I’ve been unable to find the actual citation, but I will share the website where this article was referenced. Samhita Arni, “Better, Spill the Beans: Feminine Mythique History & Culture” in The Hindu  (https://www.thehindu.com/society/history-and-culture/on-folk-tales-women-and-the-unspoken-words/article19682990.ece).]

Posted by wisecronecottage at 2/03/2021 08:18:00 PM
Email ThisBlogThis!Share to TwitterShare to FacebookShare to Pinterest
Labels: 2021, Folktales