The Old Woman Weaves the World 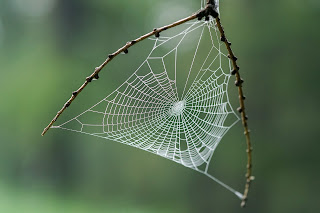 There is an indigenous story, some tell, of an old woman who weaves the earth into existence.  I have shared it here before. She sits on a rug, loom before her, and weaves the pattern of life as we know it.   Day and night, she works until her task is finally finished.  Her creation is more beautiful than anyone could imagine.  The old woman looks at her work and smiles.  She rises to leave, but before she can do so, her faithful dog catches his paw on a loose thread.  He struggles to free himself, pulling at the thread and unraveling her work. The creation of the world remains unfinished. In one version, the old woman patiently returns to the loom, picks up the thread and begins her weaving again.

If I could, I would change the ending of the story to this: “The old woman looks at her creation and smiles. She walks out of the cave she’s been working in for so long and disappears.”  Now, when the thread is pulled, there is no one assigned to make repairs. The Creator is gone, and chaos ensues. It is up to the elders (and the crones) to make things right.  The oldest woman in the tribe comes forth and resumes the weaving.  She has been studying the webs of spiders and knows exactly what to do.  Her weaving is not as good as the Creator’s, but it will do. That is the version I’d tell if I could.

There are many stories of old women weaving the world together.  Women historically are the weavers, the sewers, the keepers of handicrafts and the builders of homes and families. It is an historical duty (not an evolutionary one assigned to our gender).  It’s a skill set passed down from one generation to another by the patriarchy, that likes to keep women’s hands and feet busier than their mouths and minds.  And even today, when many of the handicrafts like embroidery and quilt making are being forgotten, women still weave together the lives of those in their families.

Stories of weaving and spinning fill mythology and folklore.  These are the life skills of poor women.  Many make a living for their lazy stepmothers and stepsisters, the forgotten aristocracy waiting for an invite to the ball. Many of these stories share teachings of humility. Athena turns the prideful young Arachne into a spider after she boasts that she can weave better than the goddess.  In another tale, the silly boasting of a mother leads to a young woman’s capture and punishment.  She is asked to spin more than is humanly possible.   Sadly, she does not know what to do and is rescued by either three deformed old women or, more commonly, Rumpelstiltskin.  The young woman cannot spin or weave, even though it’s an essential skill to have. In her youth, she lacks more than experience.  What must she give up for this knowledge? In one story, she agrees to invite three weird old women to her wedding, while Rumpelstiltskin asks for her first-born son. Without this skill she is a child.  With it, she can marry a prince.

Native American stories speak of Grandmother Spider.   The spider spins and weaves the web of existence.  She is one of the earth’s creators.  In many of these stories, she guides and advises those who face trials and challenges.  She would be the first to help the silly girl trapped in a room and needing to spin straw into gold. The Navajos see her as a helper and protector of humans.  In fact, traditional Navajo weavers rub their hands in spider webs to absorb her wisdom and skill.
Spiders and women use the threads of creation to bring forth life and beauty.  Spinning, weaving, sewing, knitting, embroidery, darning, quilting, were all women’s work (or so they said).  Not the great artistic achievements of painting or sculpture which were the purviews of men, but practical and beautiful, nonetheless.

The world comes undone, unraveled to its core.  An old woman sits down and starts over. The shuttle moves in and out.  She skillfully works, long and hard to keep the traditions of the past alive. When the thread is pulled, she starts over again.  Sometimes she drops a stich and a hole forms in the weaving. She’s not Grandmother Spider after all.  This crone is fallible to error. Sometimes she untangles a knot with a pat on the hand.   Sometimes she tries to help or give advice.  She misspeaks or missteps and the wrong color is used.  The pattern is skewed when she does too much, if only a hug or a kind word was needed. The old woman reweaves the world continuously: in war and peace, in times of health and pandemics.  If you listen, you can hear her singing.  She is telling the stories as she weaves. She will share her skill with you if only you ask.  There is much to learn and little time to do so before her dog is at it again.

Posted by wisecronecottage at 4/27/2020 06:54:00 PM
Email ThisBlogThis!Share to TwitterShare to FacebookShare to Pinterest
Labels: 2020, Folktales, Mythology