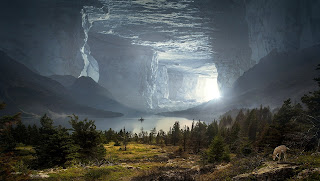 [In the last post I discussed a tale from the Mabinogion, "The Very Black Witch.  If you are unfamiliar with this story, please read the post below before reading this entry.]

And so, what can we learn from the Very Black Witch?  The Witchy Crone is the “other.”  She lives outside of normal society, in a cave perhaps, a cottage in the woods, or maybe next door. She does not meet societal norms. That’s why she is the “other.”  The Witchy Crone does not behave as women ought and does not appear as women should.  She is not fair and beautiful, dressed in golden, silken frocks. She does not have tournaments held in her honor, nor knights jousting for her hand.  Neither does she wait patiently for the hero to save her.  This is no damsel in distress.  The Witchy Crone does not act as the Maiden, for the Maiden believes in the status quo.

In the story of the Very Black Witch we see her living her life autonomously.  She has her own place to call home and is free to act.  She does not need to seek permission from her father, husband or son. She does not wait for her place at the table.  She is no lady, nor does she wish to be one. She is beyond the role of Mother for her care giving has expanded to the world.

Contemporary women of age often feel invisible.  It is a world in which they may no longer have a voice.  While this perception is a valid one, it is certainly not destined. The Very Black Witch is only a rumor and almost invisible until the knights find her.  Once they do, she is seen clearly and is a force to recon with. In my telling, we see her more fully as both clever and crafty.  She is easily able to defeat Arthur’s men. The Very Black Witch is strong and skilled in fighting.  She is the Crone.

If anything, the Very Black Witch shows us that the crone has more power than is acknowledged by youth and the “over culture.” When you intrude too much into her sphere, when you disrespect her too much, “Beware!” She will fight for her survival and the survival of what is important to her very existence – whether it be for the children of the world or the very earth itself. The Crone is the grandmother, the daughter of mother earth.
Arthur kills the Very Black Witch in the Mabinogion, but in my telling she is transformed.  I must admit that I like my version better.  In the patriarchy of Arthur’s world, she is destined to die. In the world of the Crone, she has merely fulfilled her purpose as the Black Witch and shape shifts her body into that of the white crow.  It is the crow that symbolizes her gift of prophecy.  In that form she foretells Arthur’s future. And it is a role, to which many older women are now drawn.  Years of reflection, experience and education transforms the Maiden into the Mother and finally to the Crone.

And so, what can we learn from the Very Black Witch?  Perhaps it is to surprise others with ferociousness.  Fight for what is important and close to the heart.  Share wisdom and speak truth bravely. Be willing to do something unexpected.  The Very Black Witch is clearly the “other.”  She lives a life outside of societal roles.  Yet, it is only as the Crone that she can be set free. She reminds all women, whether Maiden, Mother or Crone, that we too can step outside of these roles and be more.

Great article! So glad to find this site. After working with my Animus for many years, my dreams are telling me I am now identifying with Carl Jung’s archetype, the Wise Old Woman. She shows up as either benevolent or destructive.