Must be the Season of the Witch 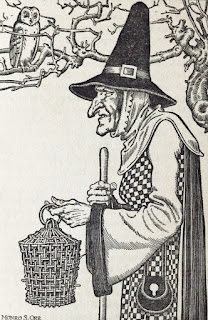 I’ve been pondering the stories of the old witch since I recently completed a class at “Carterhaugh School of Folklore and the Fantastic” on Seeking the Witch.  As we explored the qualities of the witch in folktales and literature, I began to note how often the crone presents herself as a witch in stories.  We see the witchy crone in the character of Baba Yaga and also in Snow White’s wicked stepmother, when she disguises herself as a hag.  So, who or what is a witch and how might she compare with the character and qualities of the crone? The answer most certainly changes through time.  In the long ago past, characters such as Ceridwen in the “Birth of Taliesin” might be seen as a goddess or as a sorceress, but certainly not as a witch.  The witch stereotype as we know it probably did not congeal until the 15th century when witchcraft became associated with magic and flying.  Prior to that time, these characters were sometimes seen as remnants of pagan goddesses (for example, Arianrhod or Morrigan).

The crone is a character most commonly found in folk tales and fairy tales. She presents herself as an old woman.  In some of these tales she is magical and may be disagreeable and even dangerous.  Sometimes she appears frightening.  “Suddenly the door opened, and a woman, as old as the hills and leaning on a crutch, came creeping out.  Hansel and Gretel were so frightened that they dropped what they were holding in their hands.”  Frau Holle was also frightening to behold and appeared mysterious, if not dangerous, throughout the story.  So perhaps the crone’s hideous appearance is seen as a warning in these stories.  All young, innocent protagonists are put on notice when she comes to the door.  What ever happens in the story from this point onward will certainly test their worth.But is the crone really a monster?  In many of these tales, the true monster is the one who is without honor – someone who is mean, selfish or lazy. The monster is often not the hideous witch or crone.  The monster is the one who lacks a heart. Yet, there are most certainly monstrous witches.  The witch in “Hansel and Gretel” kills (and eats) children and the wicked stepmother demands Snow White’s heart.

So is the crone just a synonym for a witch?  I searched through a handful of Grimm fairy tales hoping for an answer.  Because these are folktales there are few written descriptors.  Those would have been filled in orally by the storytellers. In several of these stories, the word “old woman,” “witch,” or “sorceress” appears.  The word “crone” itself is not used at all.  Nevertheless, that might just be an issue of translation or semantics.

This debate of who’s a witchy crone, becomes a part of the story entitled “The Goose-Girl at the Well.”  While the old woman is described as active and pleasant, she is thought to be a witch by those in the village.  They tended to avoid her whenever possible.  Throughout the tale, much magic occurs at her hands, but still the narrator does not call her a witch.  The story concludes with this disclaimer. “This much is certain, that the old woman was no witch, as people thought, but a wise woman, who meant well.”  Perhaps the Grimm Brothers are referencing all the tales in which the old woman is seen both as wise and as helpful.   That old woman is the crone, an archetypal character identified by many feminist scholars.  The bottom line is, if she is old and magical, she was once seen as a witch.  Today, however, we have other options.
The wise old woman with magical powers who serves in a generative capacity (as either guide or helper) is more rightly called the crone.  Claire Hamilton in her book Maiden, Mother, Crone describes the crone goddess in this way. “In her Crone aspect, the Goddess finds herself in the darkness, having been defeated by humiliation and death.  Yet in this place she discovers new powers.  There are riches here, the hidden secrets of new life.  At this time, the Goddess becomes wise-woman and prophetess.  It is now her role to initiate the hero into these spiritual mysteries. So, in these tales, we see her become strong and fearless.  She is ready to test the hero for the tasks of kingship, on the battlefield or in the face of death itself.  And though she has been much feared and maligned in this role, those who understand her know that after the time of challenge comes rebirth.”
Posted by wisecronecottage at 9/06/2019 10:43:00 PM
Email ThisBlogThis!Share to TwitterShare to FacebookShare to Pinterest
Labels: 2019, Grimm Brothers Tales, Wise Crone Archetype