A Place for the Wise Crone 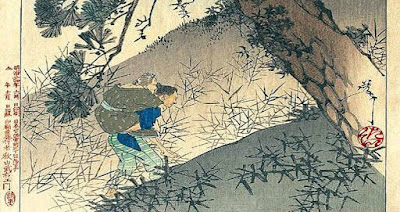 In Japan, there are many folktales about the wise crone.  In one story, an old woman is taken away by her son.  He carries her on his back up into the mountains and leaves her there to die.  This mythical practice was known as ubasute or “abandoning an old woman.”  Ubasute is the theme of many stories.

In one version, the old woman was the caregiver of a young couple.  The wife found the hag disgusting, with her crooked spine and wrinkled face.  After considerable cajoling and whining, she convinced her husband to take the old woman far away and abandon her in the mountains.  This he did, but his actions ravaged him with guilt.  In his dreams, he remembered the old woman’s many kindnesses and finally decided he could not live with his action.  So, the man went back to the mountain, found the old woman and brought her to his home. The mountain described in these stories is now known as Obasuteyama or “Mountain of the Deserted Crone.”

In another version, a son carries his mother to the mountain on his back.  She willingly went with him.  She reached out along the way, breaking twigs to mark the path.  Her ungrateful son accused her of plotting her return.  She lovingly told him that she broke the branches so he would not get lost as he made his way home.

The version I prefer is found in “The Wise Old Woman” as told by Yoshiko Uchida. In this derivation, the land was ruled by an evil lord.  He proclaimed that anyone over 70 was worthless and a drain on resources.  (Sound familiar?)  Children must take their parents to the mountain top and leave them there to die.  When one kind woman turned 70, she knew she must leave her family.  Her son placed her on his back and began to climb the mountain but halfway up he returned.  He just couldn’t do it, for he loved his mother too much.  Instead, the son brought his mother home and hid her in an underground room. She lived there for several years.

One day a warring tribe came to the land and threatened to overtake it, if the kingdom could not answer three questions.  Not surprisingly, the lord (who was not a very clever man) was unable to answer the questions himself.  So, he asked everyone in the kingdom for their advice, starting with the most educated and finally turning to the common people.  Sadly, no one knew the answer.  In desperation, the dutiful son asked his mother to help. After some reflection, she puzzled out the solution.  When the warring tribe heard the answers, they decided the village was worth saving and left them in peace.  The lord wanted to thank the person who had saved the land. The son confessed that it was his aged mother. Eureka! The lord discovered the error of his thinking and rewarded both mother and son.  From that day onwards, the elderly lived in peace and (hopefully) their wisdom acknowledged.

Many cultures today reward youth at the expense of aging.    Western culture is no exception.  Television and film depict elders as befuddled “old coots” unable to keep up with new technology or changes in the world.  The archetype of the elder, sage or wise woman is ignored along with the wisdom and experience that aging can bring.  From age discrimination in employment, to invisibility, many elders feel devalued.  Some seek the fountain of youth through surgery and beauty aids. Few proudly share their age with others.

While taking mom to a mountain top today is out the picture, finding a “place for mom” continues to be big business. Children looking for housing in a retirement home or assisted living facility often do so without much parental input.  While the West nostalgically desires to hold on to family values, it does this at the expense of living in an extended family setting. What do we lose in such an environment?  We lose both life experience and a bit of living history.  We forget what it is like to fight unjust wars, take land without adequate compensation, pollute the environment, enslave people and limit their rights. We forget about the dangers of totalitarian regimes, and the annihilation resulting from nuclear war.  History when forgotten is doomed to be repeated. Without the participation of the elders in society, people are more likely to forget.

Fortunately, this is not true in all cultures.  In India the roles are flipped with families of all generations living together and the elders giving advice and resolving family disputes. In Native American tribes, elders are revered and respected.  “I know how my father saw the world, and his father before him. That’s how I see the world,” said N. Scott Momaday of the Kiowa/Cheroke tribe. Elders are the keepers of their traditions and the guardians of their history.

Remember the wise crone in this story?  She accepted her fate with grace. She selflessly cared for her son at the expense of her own life and safety.  She shares her wisdom and experience for the good for all, but only when she is given the opportunity.  Perhaps before we hide mom away, we should all take a moment to reflect on what she has to say - even when it is uncomfortable (or inconvenient) to hear.  As a living example, wise crone and Holocaust survivor, Sonia K. speaks out against hate in this YouTube video. “Silence is the first thing after hate that is dangerous,” she wisely says.


Just remember, when our elders become expendable, we miss out on their teachings.  When our parents are too much of a hassle to remain in our lives, we lose our ability to love and give compassion to others.  Further, we are modeling behavior that may be reflected back on us by our own children.  Fortunately, the wise crone continues to break branches to show us the right way home.

The poet writes:
In the depths of the mountains,
Who was it for the aged mother snapped
One twig after another?
Heedless of herself
She did so
For the sake of her son.
Posted by wisecronecottage at 4/22/2019 03:46:00 PM
Email ThisBlogThis!Share to TwitterShare to FacebookShare to Pinterest
Labels: 2019, Folktales, Reflections on the Crone, Wise Crone Archetype