The Wise Crone Living in the Enchanted Forest 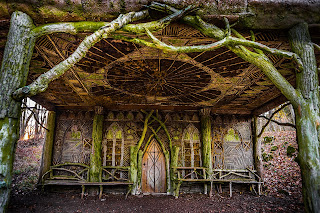 I recently came upon a podcast in which mythologist, Marina Warner, speaks of the "enchanted forest." Warner describes the enchanted forest as a place for the hero to face both trials and self-discovery, and in doing so, experience an initiation.  Living in the center of this forest is the wise old woman.  But who is this old woman who can live in such an environment? Warner gives the example of Baba Yaga as the dual sided figure, both frightening and kind.

Old women (whether hags or crones) were often the tellers of folktales, for they held the wisdom of both folklore and life.  They were healers with "medicines" of stories, words and ancient practices.  Over time, their knowledge of herbs became marginalized and condemned as the advancement of science and medicine took hold. Healing moved from the purview of women, into a study soley for men.

As the old woman's power disappeared in the world, she was transformed from the wise crone into the figure of the witch.  Ultimately, the witch was persecuted, and many accused of being such were burned at the stake. The power of the living crone appeared to go "up in flames" while in reality she simply returned to the enchanted forest, awaiting the right time to return.  That time is now. (To listen to the podcast, click here.)