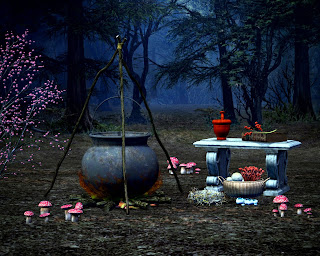 Old Woman Nature
naturally has a bag of bones
tucked away somewhere.
a whole room full of bones!

A scattering of hair and cartilage
bits in the woods.

A fox scat with hair and a tooth in it.
a shellmound
a bone flake in a streambank.

A purring cat, crunching
the mouse head first,
eating on down toward the tail--
The sweet old woman
calmly gathering firewood in the
moon . . .

Don't be shocked,
She's heating you some soup.


Zen poet and environmentalist, Gary Snyder, is the author of the poem "Old Woman Nature."
Posted by wisecronecottage at 12/11/2017 08:16:00 PM No comments:
Email ThisBlogThis!Share to TwitterShare to FacebookShare to Pinterest
Labels: 2017, Reflections on the Crone 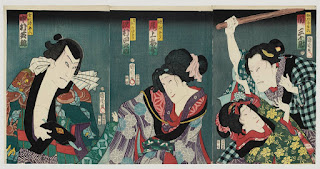 Although this tale is a Japanese variant of  "Cinderella," it also reminds me of "Frau Holle."  The story continues a pattern we have seen in other folktales. The wise crone is the one to help those youths who are found worthy (usually through acts of kindness).

This story begins with a stepmother sending her daughter (Kakezara) and stepdaughter (Benizara) into the woods to gather chestnuts.  As in many of these tales, the stepmother wishes for her stepdaughter to fail.  Perhaps she will become lost in the forest, or worst yet,  killed. In this story, Benizara is given a basket with a hole in it.  Kakezara goes into the forest, quickly fills her basket and then returns home.  But at night fall, Benizara is not even close to filling her basket.  Alas!  If she returns home without the chestnuts, she will be beaten. Although afraid (and perhaps being followed by wild animals), she continues walking until she finds a cottage in the middle of the woods.  She knocks on the door, and who do you think she finds?  Why it's the wise old woman, of course, spinning thread. The woman takes her inside but tells her she can't stay for  two sons are ferocious Onis (terrible Japanese monsters).

The wise old woman in this story like so many others, serves two functions. First, she determines if Benizara is worthy, and second, she offers help.  So before Benizara leaves, the old woman fills her bag with chestnuts, gives her a magic box and also some rice. The Onis soon found Benizara on the trail. She remembered that the old woman said to chew the rice and spit it out on her face should the Onis track her down.  "Lie on the ground quickly, child," the old woman said, "and cover your face with the chewed rice."   This she did; and when the Onis stood over her, they though Benizara was dead and her face covered in maggots!

The rest of the story is in Cinderella fashion.  Everyone is going to a play but Benizara is left at home to clean the house.  Then she remembers the box, and asks it for a beautiful kimono which appears before her magically.  She discovers her pockets are filled with candy and she shares it with her friends.  Before the play begins she hears her stepsister crying out for some candy.  Benizara throws her a hand full.  These acts of kindness are noticed by a wealthy man, who makes his way to Benizara's house. Naturally, her stepmother insists the beautiful girl he saw was her daughter, Kakezara. Fortunately the wise man asks each girl to compose a poem using specific objects. Only Benizara has the heart to compose and recite a poem of great beauty.  She is taken to his palace to marry.  On the way there, the unworthy girl, Kakezara, perishes.