The Old Woman & the Oni - a Japanese Folktale 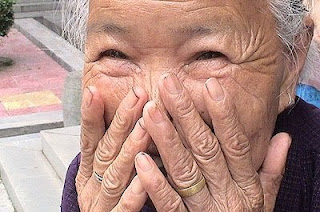 Once long ago in Japan, there was a poor old woman.  She lived in a small shack in the mountains, surrounded by beautiful cherry trees.  She was hungry for most of her days.  But whenever she had a bit of rice, she made dumplings.  They were quite tasty and her family and friends said she made the best rice dumplings in all the land. One day, she was busy in her small kitchen making dumplings, when one fell from her pan and landed on the floor.  It rolled out of her house and down the hill.  These dumplings were like precious gems to the old woman.  She screamed, “My dumpling!” and began to run after it.  The dumpling rolled to a stream.  She continued to follow it into a cave filled with Jinzo statutes. The Jinzo, you see, often show up at the cross roads. They are the patron deities who protect travelers helping them to take the right path.

“O-Jizō-Sama,” the old woman said.  “Have you seen my dumpling”?
“Be gone, old woman.  It’s not safe here. This is the land of the Oni.”
“I’m not worried about the Oni,” she said, “I just need to find my dumpling!”
Suddenly and without warning, the old woman found herself face to face with a wicked Oni.  The Oni are one of the most frightening creatures in all of Japanese mythology.  Onis look at bit like a troll mixed with the devil.  It has a gigantic red body of a man, the head of a monster, two horns, wild hair, and pants made from tiger skin.  Curiously, the old woman was not afraid.
“Don’t hurt her!”  the Jinzos cried out.
“I have no plans to do that,” the Oni smiled, “I just want her to make some more of these delicious rice dumplings.” He licked his fingers as he ate the last bite of the dumpling that had landed right at his feet.

The Oni led the old woman into a kitchen.  From the doorway she could see a hall filled with hundreds of Onis all waiting for their dinner.
“Make us dumplings,” he said.
“There is no rice here for me to do so,” she replied.
“Watch me.” He lifted the large pot and filled it with water from the stream.  He brought the water to boil and into it he dropped a single grain of rice.  He stirred the rice with a large red spoon.  One grain became 10 and with another turn it became 20, 20 became 40, 40 to 80 until the pot was full.
Soon she had enough rice to make the flour to form the balls, and to steam the dumplings to feed all the Onis in the room.  But just as soon as they finished eating they wanted more.

This time when she took the pot to the stream, she began to sing a beautiful Japanese lullaby.  The Onis who had not heard a lullaby since they were babies, were soon fast asleep.
“Here is my chance,” the old woman thought, “If I don’t leave, I’ll be cooking forever.”  She wanted to go home and rest her feet on her mat.
But how was she to make her way home? She looked at the water and knew the quickest way home was to float downstream but there was no boat nearby.  All of sudden, she had an idea. Maybe she could float down the stream in the large rice pot.  She pushed it into the water, climbed into the pot, and started to make her way downstream, by paddling with the large red spoon.
It wasn’t long before the Onis awoke and saw the old woman escaping.

The old woman looked so ridiculous covered in mud with fish flapping all around her that Onis too began to laugh.  All the water in their mouths was spit out into the stream filling it again.  Quickly the old woman jumped back into the pot, floated out of the cave and was soon back in the sunlight.  She made her way home with both the pot and the red spoon.

Now the old woman was able to make enough dumplings for the entire town.  She would simply take the pot to the stream, fill it with water, bring it to boil, and into the water drop a single grain of rice.  She stirred the rice with a large red spoon.  One grain became 10 and with another turn it became 20, 20 became 40, 40 to 80 until the pot was full.    With the red spoon she was always able to make dumplings fast. And quite cheaply too. She sold them and soon became the richest woman in all of Japan.

------------------------------
The Oni is the “Other.”  The "Other" is someone who is not like us. He or she looks different, thinks different, acts different. Today some see the "Other" in people of a different race, ethnicity, religion, gender, or sexual orientation.  In the island culture of Japan, long ago, having a fear of the "Other" was quite common.  It was the unknown and became symbolic of great evil and destruction. Onis are found throughout Japanese culture filling their plays and dance. Most often they are represented by wearing a ferocious mask.  But what is behind that mask? This is the question that the wise old woman asks. 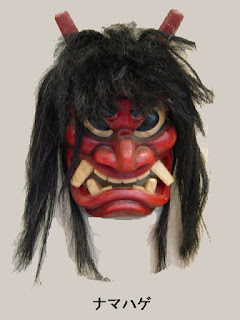 In this story the old woman is the "unlikely hero."  She is both kind and fearless before the Onis.  Their difference does not scare her.  She sees who they are behind their fearful mask.  She soothes them with her lullaby.  And when opportunity presents itself, she finds a way home. When almost captured, she doesn't yell threats  or cower in fear.  She laughs at the silliness of her situation; an old woman, slipping and falling and covered in mud!  Home at last, she doesn't rest out her days in a rocking chair,  Instead she starts a business and becomes the richest woman in all of Japan.  She is the wise old woman archetype: fearless, clever, kind, and industrious.  She sees beyond the surface to find an unexpected solution to the trials that are before her.
Posted by wisecronecottage at 12/23/2016 11:03:00 AM
Email ThisBlogThis!Share to TwitterShare to FacebookShare to Pinterest
Labels: 2016, Folktales