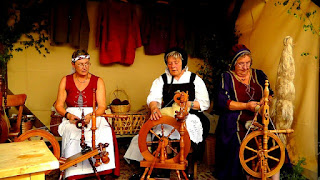 In the "Three Spinning Women," we see how the image of the crone as ugly and disfigured, contrasts against her kind heart and magical power. She is the helper once again.

Here is the Grimm story found in Household Tales as translated by Margaret Hunt in 1884.


THERE was once a girl who was idle and would not spin, and let her mother say what she would, she could not bring her to it. At last the mother was once so overcome with anger and impatience, that she beat her, on which the girl began to weep loudly. Now at this very moment the Queen drove by, and when she heard the weeping she stopped her carriage, went into the house and asked the mother why she was beating her daughter so that the cries could be heard out on the road? Then the woman was ashamed to reveal the laziness of her daughter and said, "I cannot get her to leave off spinning. She insists on spinning for ever and ever, and I am poor, and cannot procure the flax." Then answered the Queen, "There is nothing that I like better to hear than spinning, and I am never happier than when the wheels are humming. Let me have your daughter with me in the palace. I have flax enough, and there she shall spin as much as she likes." The mother was heartily satisfied with this, and the Queen took the girl with her. When they had arrived at the palace, she led her up into three rooms which were filled from the bottom to the top with the finest flax. "Now spin me this flax," said she, "and when thou hast done it, thou shalt have my eldest son for a husband, even if thou art poor. I care not for that, thy indefatigable industry is dowry enough." The girl was secretly terrified, for she could not have spun the flax, no, not if she had lived till she was three hundred years old, and had sat at it every day from morning till night. When therefore she was alone, she began to weep, and sat thus for three days without moving a finger. On the third day came the Queen, and when she saw that nothing had been spun yet, she was surprised; but the girl excused herself by saying that she had not been able to begin because of her great distress at leaving her mother's house. The queen was satisfied with this, but said when she was going away,"To-morrow thou must begin to work."

When the girl was alone again, she did not know what to do, and in her distress went to the window. Then she saw three women coming towards her, the first of whom had a broad flat foot, the second had such a great underlip that it hung down over her chin, and the third had a broad thumb. They remained standing before the window, looked up, and asked the girl what was amiss with her? She complained of her trouble, and then they offered her their help and said, "If thou wilt invite us to the wedding, not be ashamed of us, and wilt call us thine aunts, and likewise wilt place us at thy table, we will spin up the flax for thee, and that in a very short time." "With all my heart," she replied, "do but come in and begin the work at once." Then she let in the three strange women, and cleared a place in the first room, where they seated themselves and began their spinning. The one drew the thread and trod the wheel, the other wetted the thread, the third twisted it, and struck the table with her finger, and as often as she struck it, a skein of thread fell to the ground that was spun in the finest manner possible. The girl concealed the three spinners from the Queen, and showed her whenever she came the great quantity of spun thread, until the latter could not praise her enough. When the first room was empty she went to the second, and at last to the third, and that too was quickly cleared. Then the three women took leave and said to the girl, "Do not forget what thou hast promised us, -- it will make thy fortune.

When the maiden showed the Queen the empty rooms, and the great heap of yarn, she gave orders for the wedding, and the bridegroom rejoiced that he was to have such a clever and industrious wife, and praised her mightily. "I have three aunts," said the girl, "and as they have been very kind to me, I should not like to forget them in my good fortune; allow me to invite them to the wedding, and let them sit with us at table." The Queen and the bridegroom said, "Why should we not allow that?" Therefore when the feast began, the three women entered in strange apparel, and the bride said, "Welcome, dear aunts." "Ah," said the bridegroom, "how comest thou by these odious friends?" Thereupon he went to the one with the broad flat foot, and said, "How do you come by such a broad foot?" "By treading," she answered, "by treading.""Then the bridegroom went to the second, and said, "How do you come by your falling lip?" "By licking," she answered, "by licking." Then he asked the third, "How do you come by your broad thumb?" "By twisting the thread," she answered, "by twisting the thread." On this the King's son was alarmed and said, "Neither now nor ever shall my beautiful bride touch a spinning-wheel." And thus she got rid of the hateful flax-spinning.

In the "Three Spinning Women," another Grimm telling of a German folktale, a lazy girl is given an impossible task of spinning a large amount of flax.  She enlists the assistance of three hideous, old women.  The nature of their disfigurement becomes an essential part of the story.  One woman has a large, broad flat foot that she drags behind her, another a lower lip that is stretched to her chin and the third an overly large thumb.  They agree to help the girl saying, "If you will invite us to your wedding, not be ashamed of us, call us your aunts, and let us be seated at your table, we will spin all the flax for you, and in a very short time at that."

Clarissa Pinkola Estes tells an expanded version of this story in her "Dangerous Old Woman" audio series.  In this story, the girl is saved and then falls in love with a prideful soldier.  As they plan marriage, she sends a message to the old women, who meet up with the arrogant young man on the road.   He returns to his finance with disparaging comments about the three old women he met on his journey.  She tells him these were most likely her "aunties" and shares with him how they saved her life.  But the young man is not worthy, he can only see the "surface" of who these women are.  In anger he refuses to allow them to attend the wedding.  The girl, who remembers her promise, breaks off the engagement.  The finance storms off and then finds himself in three harrowing events, to which the old women come to his rescue.  Each time the women ask him to let them attend the wedding.  Each time, the young man promises and then recants. Finally he agrees and sees their true nature.  He is now proven worthy and the wedding occurs. Estes version portrays the old women as both helpers and also those who mete out justice (similar to the Frau Holle story).

These wise old women are mysterious and magical, but appear with many years of spinning skill and experience. They offer their selfless service to the girl.  Her test is only to recognize them, and show their worth to the world.  The invisible is made visible in this story and the girl discovers worth within an unknown and unlikely source.
Posted by wisecronecottage at 10/29/2016 09:09:00 PM
Email ThisBlogThis!Share to TwitterShare to FacebookShare to Pinterest
Labels: 2016, Folktales, Grimm Brothers Tales