The Crone as the Storyteller 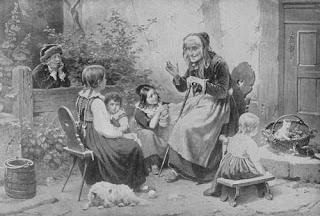 I’ve been reading Marina Warner’s book Once Upon a Time.  Naturally, I start by checking out any references to the crone, and guess what I discovered? The telling and retelling of the early folktales and fairy tales was primarily the purview of women.  In fact the first book that was written by Frenchman, Charles Perrault  (in the 1600s) was written under a pseudonym.  Using his son’s name as author he claimed the stories were initially told to him by old women and nurses.  This belief, that women primarily told the tales, was why these were initially called “old wives tales.”  Later his use of the subtitle, Tales of Mother Goose, signaled this rich tradition of grandmothers and crones as storytellers.  We see this theme continuing in the work of Giambattista Basile. In Il Pentamerone, the tale is structured with ten crone storytellers telling 50 tales over five days. So perhaps one of the key roles of the crone is to share the rich tradition of our ancestors’ wisdom through story.  As we remember and share this wisdom we become the wise woman!

Email ThisBlogThis!Share to TwitterShare to FacebookShare to Pinterest
Labels: 2015, Reflections on the Crone

The Wise Crone Waits in the Crossroads with Hecate 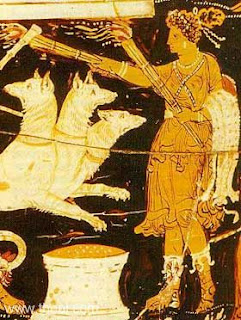 A few posts ago we began to explore the Greek goddess, Hecate (or Hekate).  Who was Hecate? Hecate was believed to be a Titan (the giants who were the precursor to the Greek gods). When Zeus came into power, the Titans were destroyed, all that is, except for Hecate. She was the daughter of Perses and Asteria.  For some unknown reason, Zeus honored her and decided to share some of his power with her.  The very name Hecate, in some translations, means “she who has power far off.” So for some, Hecate was the goddess of “manifestation.”  The one who could fulfill the needs and wishes of her followers.  She could increase the size of the herds, the catches of fishermen and give victory in battle.  She had power over heaven, earth and sea.

Later, she is seen as standing at the cross-roads in the twilight; at the threshold into the past, present and future.  In fact, in most representations, she is depicted as the three faced (or bodied) woman standing at the threshold.  She is the one who can see three ways at once. Often she has with her three dark hounds, two or three torches, a key, rope and a dagger.  This is the place where the veil is thin between this world and the next.  The hounds symbolizing the underworld, the torches allow her to see in the dark, the key unlocks secrets, the rope that leads one safely from this world to the next, and the dagger to cut any illusion. Now she becomes Hecate, the goddess of the moon, of darkness and of the night.  She becomes a representative of the occult.  We now see her as the patron of Medea (thought to be an enchantress).  Some say she ruled the power of regeneration or, at the very least, the ability to come back from the dead.

Unfortunately, there are few mentions of her in Greek mythology.  The most significant being in the story of Persephone and Demeter.  In case you have forgotten, here is a quick overview.  Persephone was the beautiful daughter of Demeter (goddess of harvest) and Zeus (the king of the gods).  One day while picking flowers, Persephone was abducted by Hades (the god of the Underworld).  Demeter became distraught and searched the world over for her daughter, without a trace being found.  Hecate, who was a witness to the event, advised Demeter to visit Helios (the god of the sun) who could tell her what happened.  Helios explained that Zeus had agreed to give Persephone to Hades as a consort and wife.  When Demeter learns of this deception, she begins to grief.  The grief was so profound that the entire earth began to die and finally the gods and goddess of Olympus interceded.  Zeus agreed that Persephone must return to be with her mother.  However, while she was in the Underworld, Hades convinced Persephone to eat three or four seeds from a pomegranate.  Anyone who eats in the Underworld is destined to return there, so after much debate it was decided that Persephone would return to the Underworld 3 months each year and be the bride of Hades.  Hecate agreed to both “precede and follow” Persephone into the Underworld each year.

What can we learn of the Wise Woman archetype from this story?  Hecate is the observer, the witness.  She is the one who watches the struggles of life sometimes without acting and yet, seeks to bring truth to light. She certainly could have acted sooner, but was it her place to do so, or Demeter’s?  Hecate understands what role she must play and the best way for things to unfold, for she is all knowing. We see Hecate presiding over moment of truth.  As the one who guides us in using our intuition, our dreams and our gut instinct, wisely.  James Hillman writes in The Dream and the Underworld, that by embracing Hecate “we may observe our own catastrophes with a dark wisdom that expects little else.”

Hecate is part of the “triple goddess,” a mythological construct that appears throughout various cultures.  In this posting we’ll explore the Greek version, and in later posts we’ll discuss the Celtic variations.  One version of the triple goddess is seen with Persephone, Demeter and Hecate; symbolizing the maiden, mother and crone. Another depicts the phases of the moon in which the goddess Artemis is the waxing moon, Selene, the full moon; and Hecate, the waning and dark moon.
As the wise crone, she is the one who transitions smoothly into the third phase of life.  This is the time of knowing from both experience and intuition.  It is the time of watching and waiting, for when to share and when to observe.  Some say she is the death midwife; the one who guides the soul to its next existence, nurturing, and motherly easing this transition.

As women become wise ones, we can often feel Hecate’s spirit or this archetype around us.  We greet her at the gate, at the cross road.  This is when we move from our time as the “householder” (the caretaker or the bread winner) into the third phase of our lives that is concerned with spirituality, meaning and purpose.  The things of the world begin to lose their interest and we seek something… more.  And so, as we strive to get our bearings and figure out exactly what this time will mean for each of us, we wait at the threshold with Hecate, as she midwives us into our new existence.  She encourages us to look at life in a different way, to see the big picture and to begin to lead not with action but with intuition.  She advises that we let others come to us for guidance, that we accept their gifts of respect and homage.  She tells us to wait and in waiting we’ll know exactly the “right” thing to do.

In ancient Greece, women would often evoke Hecate for protection.  They would place an image of her at their doors.  They would bring her supper, left at the cross roads, when the moon was dark.  And so perhaps, that ancient wisdom can be used in good stead today.  At times of inner conflict, we too can invite the “spirit” of Hecate into our lives.  We can make supper for her and eat it together in the darkest night.  The time is then ripe for a new beginning. Be on the alert for the wisdom of dreams, symbols and synchronicities to awaken you into your own inner knowing and to the wise crone within.